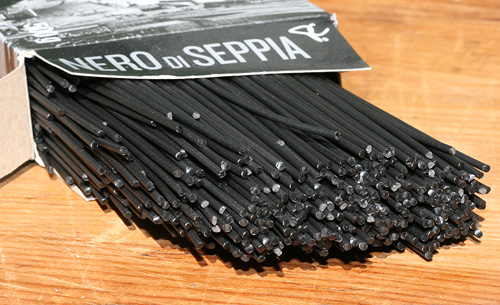 Pasta is typically made from an unleavened dough of durum wheat flour mixed with water or eggs and formed into sheets or various shapes.
Black pasta is made with pasta dough mixed with ink from some Caphalopod sea animals like squid, octopus or cuttlefish, the ink is usually generated ,stored and evacuated from a specialized structure which include the ink gland in the animals.
The ink are usually produced as a defence mechanism in the animals ,also the ink are usually gotten from the animals that are freshly dead among other ways.  Although the colours some caphalopod species produce varies from blue-black ,to brown and then  black black. 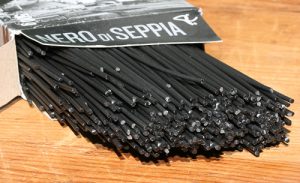 Caphalopod inks contains some chemical component and few nutrients like melanin,enzymes related to melanin production (part of what gives it it’s black colour), tyrosinase, free amino acids including  glutamic acid, aspartic acid, catecholamines, although the amount of chemical component and nutrients varies according to species and the animal.
Some food and health website claim that the caphalopod ink have been processed and used for human health benefit like antimicrobials,immune response enhancing ,anti-retrovial and potential anticancer drug. 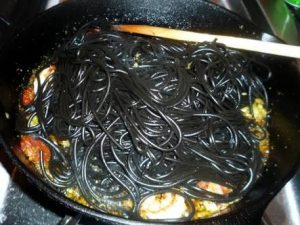 According to a lot of personal research, reading I have done  and sources from people that have eaten it, the black pasta usually salty ,but not too salty,with a sea like flavour that is also fishy.  The taste is not in anyway offensive.
Some restaurants in Europe serve this as a special major meal.
I would really love to get a taste of this black pasta some day.
Article complied and written by Sophia Jerome.
Pictures sourced from the internet.
Reference
1.https://www.theguardian.com/science/2017/augg/why-do-cephalopods-produce-ink-and-what-on-earth-is-it-anyways.
2.https://en.m.Wikipedia.org/wiki/caphalopod-ink
3. Food dictionary
4. Various site engine on caphalopod and black pasta

Lemon! Some Of It’s Benefits & Uses

Tea Sophia Jerome - November 18, 2022 0
Tea and chocolate! Have you ever tried eating chocolate while sipping a cup of steaming tea like I like to do sometimes? Believe me,the combination...

Gardening Sophia Jerome - November 18, 2022 0
So awhile back I found lots of earthworm in a sack of plant. What did I do about it? I distributed the earthworms into...