Home Food history A 106 Years Old Fruit Cake! Yes.
Facebook
Twitter
Pinterest
WhatsApp
Fruitcake is that exquisite cake used mostly for special event like  weddings, anniversaries, Christmas or to celebrate something awesome. Some of us do not even bother to wait for anything special before eating or making an order for a fruit cake especially for one with no icing or decoration because we know how exquisitely delicious the cake is and not minding its one of the most expensive cakes to bake or buy which makes it more special.
Aside from the exquisite delicious taste, this cake can last for several months to a year without refrigerating depending on the recipe and baker,the least a proper fruit cake stays preserved without refrigerating is three months that is if one was not told anything by the baker & you just happen to forget about it.
Do you know a fruit cake can last for over 106years? Here is the article “106-year-old fruitcake found perfectly preserved in Antarctica” I found on a cake group on Facebook called ” The Cake Faculty” Founded and managed by Mrs Itohan Asibor,one of the best and biggest cake baker in Delta state Asaba, (Bluberrycakes).
A fruitcake with its historical roots tracing back to over a century ago has been recently found perfectly preserved in a hut based at Cape Adare, east Antarctica. 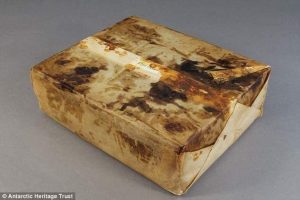 Made by British brand Huntley & Palmer, the cake wrapped in its original paper and encased in a tin-plated iron alloy box was believed to have been left over by a surviving group of an ill-fated expedition to the South Pole between 1910 and 1913 led by British explorer Robert Falcon Scott.
Despite that the tin has begun to deteriorate, the cake still looked and even smelled “almost edible,” according to researchers from the Antarctic Heritage Trust who unearthed the food while excavating the abandoned hut some 2,500 miles from the South Pole.
Lizzie Meek, a manager from the New Zealand based Trust said in a statement that the cake would have been an “ideal high-energy food for Antarctic conditions” and is still a favorite item on modern trips to the far south.”

Tea Sophia Jerome - November 18, 2022 0
Tea and chocolate! Have you ever tried eating chocolate while sipping a cup of steaming tea like I like to do sometimes? Believe me,the combination...

Gardening Sophia Jerome - November 18, 2022 0
So awhile back I found lots of earthworm in a sack of plant. What did I do about it? I distributed the earthworms into...