The history of some countries, evolution & civilization of man would not be complete without mentioning bread or talking about bread history.

Almost 60% of world population eats bread daily. It has become a major staple food across the world.

Bread has become so important to man that it is either called “Aish” or “Eish” in Egypt, both words meaning “life” in English. So very important that in the Holy Book/Bible for Christians, the son of God sent to earth to save the world, referred to himself as the bread of life, John 6: 33-35.

Although bread can now be made from almost any kind of grain particularly if you don’t mind a flat bread since gluten in wheat which is the standard flour/grain for making bread because it creates the  elasticity that makes bread rise.

Bread was first known to be made from wild wheat,wild barley & plant roots. The oldest evidence of this is 14,000years ago from an archeological findings located in Shubayga in the black dessert in Jordan where bread remnant from a dinner left over by the Natufians who lived in the Jordan river valley region of Middle East.

The Natufians are also known to be the earliest agricultural based society dating back to 14,000years ago.

Despite this archeological findings, bread is said to be way older than 14,000 years ago, as it dates back to 30,000years ago,making it one of the oldest food according to historians, earliest man was more of a hunter & gatherer, which also meant they gathered wild grains they used for bread they didn’t grow but as time went by,they started domestication of agriculture. 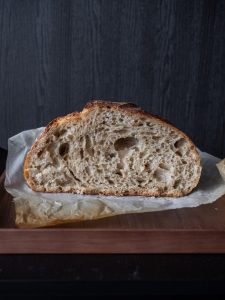 The domestication of wheat & more advanced form of bread making led to the formation of towns particularly in Northern African countries like Egypt & East Asia.

The first known grinding for crushing grains was quern & people made what we know as chapatis (India) or tortillas (mexico) which is the closest form to the bread we know today. The earliest bread were mostly flat bread before sour dough was discovered.

Food & drinks Sophia Jerome - December 3, 2022 0
Iron deficiency is a state or condition where there is a lack or insufficient amount of the micronutrient iron in the human body. It...

Food & drinks Sophia Jerome - December 3, 2022 0
Fonio grain popularly referred to in Nigeria as Acha or hungry rice, it is a grain that is very popular and grown mostly in...

What Goes Into Your Microwave Oven?

Health Sophia Jerome - December 3, 2022 0
Hello guys! Today we would be talking about how the microwave oven works and I hope to allay most of your fears and the...

What Goes Into Your Microwave Oven?